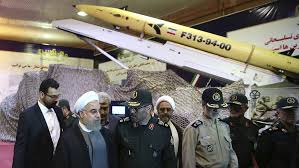 It is now crystal clear that Iran is seeking to replace its lost nuclear prestige and clout by showcasing its ballistic missile program. Although what Iran has obtained to this day has been nothing but further isolation and a missile crisis replacing the former nuclear crisis. To add insult to injury, Tehran’s missile row entered a new phase on Tuesday, March 29th as the United States and its three European allies, France, the United Kingdom, and Germany called on the United Nations Security Council to address Iran’s latest ballistic missile test launches. World powers have described these test-fires provocative and in violation of UNSC Resolution 2231, providing even more pervasive headaches for the top brass in Tehran.

The U.S. and its allies have taken a step forward calling on UN Secretary-General Ban Ki-moon to issue a full and comprehensive report over Iran’s ballistic missile activities. Ban immediately fell in line to their request, holding a UNSC session on Friday, April 1st. Iran is counting on trade partners Russia and China to oppose these measures, like Beijing, in particular, is against anything that may threaten the Joint Comprehensive Plan of Action sealed with Tehran. However, Iran’s defecting forces inside the country and proxies abroad watching this feud closely are most probably reminded of similar pledges and propaganda provided by senior regime officials and media prior to the JCPOA. Yet in the end, the mullahs were scrapped of their adored nuclear program, left with naught and completely disgraced.

During the two-day nuclear security summit held in Washington with leaders of 50 countries attending, absent Russia, Iran, and North Korea, Obama assured the JCPOA sets an adequate precedent to enforce future setbacks on Iran. This may include demanding Tehran foreswear its ballistic missiles.

Wendy Sherman, the former lead U.S. negotiator in nuclear talks with Iran, published a recent piece in USA Today underlining the international community must uphold punitive sanctions against Iran for its support of terrorism, human rights violations and expanding its nuclear-capable ballistic missile technology, further threatening the region. Washington has also held back on permitting relief of various multilateral sanctions, leaving Iranian state TV moaning promises that have only been on paper. This provides more insight into why Iranian Supreme Leader Ali Khamenei was furious in his March 20th speech over how sanctions still loom over Iran. The ballistic missile launches orchestrated by the Revolutionary Guards are only saber-rattling and warmongering measures useful for domestic purposes.

Finally, an overshadowing warning issued by an Iranian Foreign Ministry official paints a significant image. His piece in Iran’s state Asr-e Iran daily on March 26th reads in part: “The same prescription the West used to refer Iran’s nuclear dossier to the UN Security Council, parallel to a variety of sanctions, can quite possibly be implemented in the missile dossier… the next U.S. president will use these levers against Iran.”

Iran is refusing to waver from its cherished nuclear-capable ballistic missiles. For now.

The Adaptation of Cloud Computing by the Healthcare Industry