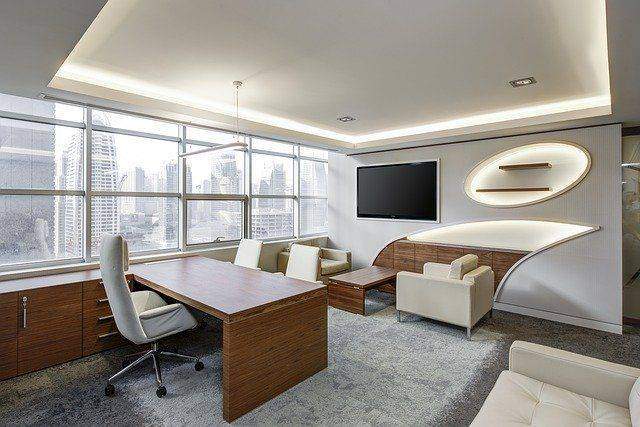 The workplace is so much more than just the place where the money is made. It’s a space where people spend a lot of time weekly and it is very important for creating a company culture. The way people speak and behave in an office is the result of the office design.

When people aren’t happy with their company culture, one of the ways to make it better is to work on office design. The office didn’t always look the way it looks today. It went through some phases to get where it is and it will probably develop further with the advances in science and technology.

How did the office design evolve?

The office of the 1980s was very different from today’s office. Different times, different economy, and different societies had different needs and possibilities. For instance, the seating system was cubed and the couches were over-padded. The workers were independent due to the cubicle style of the office. The space was usually cramped, with a lot of people working in one room.

The modern office may also be designed in a cubicle style, even though that is less common today. The type of the cubicle is different and it’s adjusted to the digital era. The furniture in the 1980s office was usually shiny. A plant would be placed somewhere in the office, and these would make the focal points of the office. This, too, is retained in the office design today. It’s usually there to point out the nostalgia for some past times and it does it perfectly. Of course, it’s not the same as it was before, but some parts of the furniture may be shiny to make the space more interesting and bring a sense of the past to it.

It’s undeniable that the office in the 1980s had a great influence on today’s office. The technology used today all originates from this era. For instance, VHS, some gaming systems, and cassettes have influenced the use of technology that is popular today. Even though the choice is much wider today, the truth is that a lot of 1980s stuff or, at least, 1980s related stuff can be found in the modern office. Most of those things are considered to be retro and that’s exactly why they are so popular and appealing.

With the beginning of the new decade, things got much more modern. Since the new era began, things changed. One of the first things that changed was the attitude towards the workplace. As opposed to the eighties where the focus was on the work and the individuality in the office, the nineties were completely different. The workers didn’t just come to the office to do their job, they wanted to be more integrated and they focused on socializing more. This led to the change of the office design and the needs of the workers were met.

The cubes were replaced with the virtual officing. Virtual officing meant that there was no fixed sitting arrangement. With no allocated desks, people could come in the morning and choose where they want to work. They would grab their laptop or paper and work anywhere. With such an approach to office life, the productivity of the people was able to bloom. People were able to feel more relaxed and they could choose the environment they wanted to be in.

In the 1990s, the majority of the work was still done manually and on the paper. It wasn’t until the 2000s that the computers became as important as they are today. Because of this, people had to move a lot through the office. They would have to get up a lot and twisting injuries were common. This is why ergonomic chairs became popular and almost every office had them. Telecommuting was also introduced in the 1990s. Even with the limitations of the era on technology, telecommuting was still possible. It brought a lot of benefits, but it has only become popular in recent times when technology has evolved more.

The digital era of the 2000s and 2010s changes the look of the office completely. For instance, the industrial lighting was introduced, as well as the huge open-plan spaces. The office started to resemble home thanks to the Google inspired office design. Even the beds were included in the office design. This is all done to make the workers feel relaxed and stress-free. They were supposed to be comfortable and have positive feelings towards their workspace. Their creativity was supposed to bloom in such environments.

The virtual officing that was envisioned in the 1990s was finally realized. The office became a genuinely friendly space thanks to the advances in technology. The furniture in the office became connected, networking became the biggest trend. The workers’ dream to work in healthy surroundings made for their needs and wishes has finally been realized. The furniture became easier to move around and people’s working hours were facilitated in many ways.

Modern-day office furniture is different from past trends since it’s more curvaceous and less conventional when it comes to color schemes. Companies can order the furniture they need. This way they can make sure that the furniture fits perfectly into the working ethics and builds the company culture in the way that is planned. The walls are usually white and there are smaller pops of color that make the perfect harmony in the office. Such a design is great for evoking creativity since it relaxes the workers. The break-out areas are common parts of the modern offices which are very important for the workers’ well-being and productivity.

What is the effect on company culture?

A shockingly modern concept when it comes to office design today is actually putting the employees first. More and more entrepreneurs care about how their employees feel, how motivated they are, and actually think about whether they are satisfied with the company or not. This is reflected in actually making the office take comfort into consideration.

A big part of company cultures today is having a comfortable work environment. The office should exude comfort. Chairs and desks, keyboards and computers, all have to be set up in such a way as to provide employees with appropriate comfort and ergonomic assistance. Back pain and carpal tunnel syndrome are serious issues that plague the modern office worker, and they need to be mitigated pronto.

So, we suggest you get proper desks and chairs. Invest in furniture that makes people’s jobs easier, not harder. An employee sitting for six to eight hours per day in the same chair, at the same desk, will feel the ramifications of this kind of work pretty soon. It can all be avoided, though, if you work on this issue.

Long gone are the days of taskmasters forcing you to bleed for your company. Or rather, these are gone for good, high-quality companies. No serious business environment makes its employees drop dead from working. They understand the importance of breaks, of relaxation. If you want good results, if you want high productivity, great creativity, and an all-around positive atmosphere in the office, you need to allow people to take a break from their work. It needs to become part of how your workspace is designed.

You want to give people something to do when they relax during work hours. A simple thing such as professional coffee machines for businesses is great, as is comfy lounge chairs and a nice and spacious rec-room. Maybe a foosball or pool table is what your people need to blow off some steam. Just remember to keep people’s breaks in mind when it comes to office design.

If you really want to cash out, you can invest in a gym or even a pool. Decking out a nice office kitchen can also be greatly appreciated, as can having the right appliances (like a large fridge, several microwaves…).

Caring about the health of your employees is also a big part of office designs and company cultures. While air quality is not as direct or noticeable as, for example, the presence of comfortable chairs or useful appliances, it’s still a big part of keeping your employees happy and in tip-top shape.

Namely, poor air quality can decrease productivity and performance. It allows for the spreading of diseases, it makes more people miss out on work and forces them to go on sick leave. Your people get sick, and you lose money – nobody is happy here.

Furthermore, low air quality doesn’t smell good. In fact, it can make your entire office feel unpleasant. This will tank motivation and productivity and can be downright unprofessional and embarrassing.

An interesting new development in many modern offices in the implementation of open spaces. Long gone are the cubicles of old, the cramped and claustrophobic spaces that make you feel like you are in a prison.  That’s where open-plan layouts come in.

Open-plan layouts have special breakaway spaces that give you some extra privacy, all the while giving you open communication and transparency. It lets you get some room for yourself to focus, all the while maintaining the sense of companionship and community that new company cultures desire.

Flexibility is also a key component of today’s workforce. Space needs to serve you, you shouldn’t serve it. It needs to be adaptable, to change and morph and to be shaped according to the task at hand. Furthermore, having your work environment change and shift with your work allows you to push tough boredom, apathy, and generally ennui. Your employees will feel refreshed and invigorated by a new setup.

So, open spaces with as much flexibility as you can muster are the way to go. Keep things open, let people communicate easily and unhindered.

Your workspace shouldn’t just be a utilitarian, drab and boring space. Rather, it should be a place of beauty and of work. Adding art pieces, sculptures, paintings, making the place beautiful will help you significantly. People will appreciate the office more, they will look forward to getting here and getting to work. An appreciation for aesthetics can go a long way when it comes to office productivity.

Furthermore, you shouldn’t forget about the color. There is a strong correlation between colors and psychology, a correlation that shouldn’t be denied. For example, blue colors and stable, soothing, it allows people to focus on their work. Green is great for long hours because it relieves eye fatigue. Yellow is optimism, it’s creative and joyous. Then, you have read, which boosts your energy levels, but also works on your aggression. Darker colors are calming, but can also be depressing, while lighter, energetic colors can give you, you guessed it, energy, but can also cause anxiety.

A simple point, but an important one nonetheless. Today people want to connect with nature as much as possible. We understand now just how important it is for our health and our sanity. There is an instinctive bond that can be found between humans and other living things. Getting some of the outdoors in the office is an important factor.

Using large, open windows, you can get a lot of natural light into your place of work. It allows you to make a very positive impact on the mental health of your employees, it reduces stress, it lowers cortisol production, and it boosts people’s immune systems through the introduction of vitamin C.

Getting plants can give you similar results. Plants can act as filters, improving the air quality of your home, boosting happiness and positivity. It also makes the entire place just look much better and healthier.