Giacomo Girardi is familiar with luxury accommodations, not because he dwells within them but rather because his work requires it. As a graphic designer for PXP Media (known for its work with brands as diverse as American Express and Converse), Girardi was placed in charge of a campaign for Quintessentially LA. The Los Angeles branch of this London based company stands among the New York, Dubai, Hong Kong and other branches (60 worldwide) as one of its premier locations.

The hundred-million-dollar Quintessentially is a world-leading concierge company catering to highly discerning members who are used to the “good life.” Giacomo was enlisted for his talents as a Creative Director, Graphic Designer, and photographer to develop a campaign that would increase interest in users of Quintessentially LA. Because the service includes buying, selling, renting, and managing luxury real estate, it was paramount that the tone of Giacomo’s work appeal to users’ sensibilities (Quintessentially has an estimated 86,000 subscribers, including 800 billionaires) as well as its global branding. 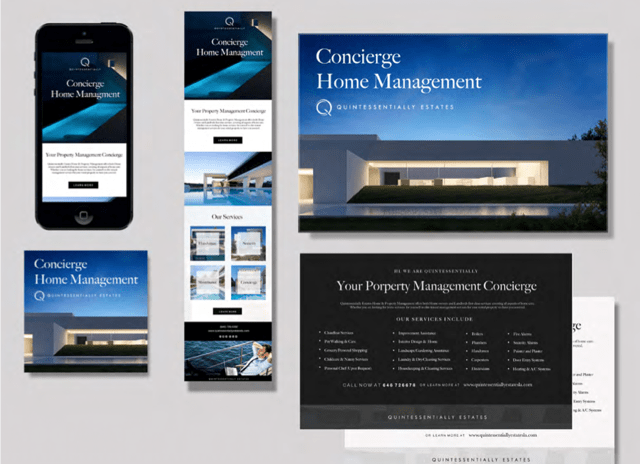 LA is a prime area for luxury real estate. Giacomo was tasked with raising awareness for Quintessentially in this market but this came with the caveat of retaining the global Quintessentially tone. Girardi relates, “This is precisely the reason I was so excited to work on this campaign. I had just finished a rebrand for a company that makes premier dog washing units and the starkness between these two projects was a challenge to prove my ability to change directions instantly.” For a company like Quintessentially that is known for its association with celebrities like Eva Longoria and Victoria Beckham as well as its announcement of a super-yacht project, there is an existing precedent.

Girardi creating his own design

After studying the company’s current design, Girardi went about creating his own design inspired by this while rebuking any overly artistic additions. Relying on the official Quintessentially fonts, color palette, and images (including the proportions, relations, and hierarchy through them) Giacomo created a campaign conducted through the mail, web ads, Google retargeting ads, brochures, postcards, and fliers. This approach communicated the classic simplicity of understanding the preferred tone of communication between a company and its client base.

The psychology of this course and its effectiveness cannot be overemphasized. What Giacomo displayed in working on this campaign for Quintessentially is that, as a graphic designer/photographer in charge of creating content for a multimillion-dollar international company, an artist must understand the audience perhaps more than themselves. In business as in our personal lives, the art (no pun intended) is in finding our own expression in a situation that allows others to enjoy it.

For Girardi, tailoring his skills to resemble the established identity of Quintessentially was an exercise for himself and the beginning of an association between PXP Media and Quintessentially. As Amber Jolley Operation Manager of Quintessentially Estates, Los Angeles puts it, “PXP’s Giacomo Girardi helped us identify different ways of communicating our branding message to our audience. This has helped propel many of our initiatives over the past year. Giacomo is a talented artist but he’s much more in that his ability to understand how to communicate to our target audience and execute these ideas is extraordinary. Our brand has definitely been elevated in many aspects and channels via our work with PXP and Giacomo.”

Step-By-Step Guide: How to Choose an Appropriate Product Packaging

The Arizona Car Accident Laws You Should Know About

How a Lawyer Will Investigate a Truck Accident and Collect Evidence